- NEW IDEAS FOR THE TWENTY-FIRST-CENTURY DEPARTMENT - 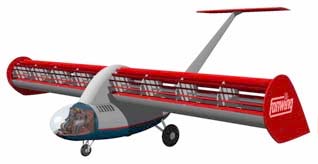 It may look like a combine-harvester but a plane designed in a Tuscan farmhouse is being hailed as one of the great breakthroughs in aeronautical history.

The wheat fields roll, the high pines march along the ancient roads, the sweet sunshine pours down. This pretty, rust-red farmhouse off the Via Laurentina would make the perfect setting for a Roman rival to Under the Tuscan Sun, a good place to work up a new Italian cook book.

Instead it is the birthplace of a new aeroplane hailed as "the fourth great breakthrough in aeronautical science". Leonardo da Vinci has skipped forward a few centuries and south a few hundred miles and taken up residence in the body of an expatriate American called Patrick Peebles.

A self-taught inventor whose ideas include a loudspeaker composed of a gas flame and a rotating fork for eating spaghetti may be on the brink of conquering the aircraft industry.

Pat Peebles, a compulsive tinkerer who skipped university and whose last proper job involved servicing McDonald's food processors has invented a new aeroplane that looks as if it has been crossed with a combine harvester. "At Farnborough [air show] recently a lot of people asked if it would also mow their grass," he admitted.

But the bizarre-looking aircraft, with long rotors running the length of both wings, has already attracted tens of thousands of pounds in grants from the British Government. Mr Peebles has been nominated for an honour (alongside Burt Rutan, pioneer of cut-price space flight) at the World Technology Awards in San Francisco next month.

In his small workshop, Mr Peebles is working feverishly on the latest refinement of his "fan wing" design, a proposal for the American government to give it vertical take-off capability. If the Pentagon goes for it, his revolutionary aircraft, which has also been dubbed a "sky barge", could within a couple of years become an operational reality.

It is the classic story of the solitary, quietly cranky inventor riding his hobby horses, going his own way and dreaming up something stunningly new, precisely because he is not an expert - "not disadvantaged", as one of his admirers put it, "by knowledge".

Mr Peebles, an American, was born in Washington DC and raised in Rome, where his father worked for the UN's Food and Agriculture Organisation. After a spell in Britain, where he met his British wife, and now his business partner, Dikla, he moved back to the Italian capital.

Inventing stuff was Pat's passion, first under the kindly eye of his dad, later in whatever time he could steal from his humdrum jobs. "I have a very hard time with traditional thought processes," said Mr Peebles. "I was very hard to teach, did very badly at school. I was in a daydream the whole time."

The flame loudspeaker was an early invention: with a tiny earphone at the base, and a flame rising above it which amplified the sound. "It worked," he said, "but it wasn't very practical carrying a bottle of gas with your radio."

The spaghetti-twirling fork, another early wheeze, was built as a birthday present for his brother. Still in working order, constructed all in brass, it's a handsome item, though perhaps a little heavy for daily use. "I asked my mother to lend me a nice fork," said Pat. "She didn't know I was going to saw it in half." His other inventions include a piano keyboard enabling all keys to be played using the same fingering, and what may have been the first electronic planimeter, a device for calculating the area of land, which Pat actually manufactured and sold to the Italian government before the Japanese came up with a prettier version.

To date, the planimeter is as close as he has come to successfully commercialising an invention. But the fan wing aeroplane has taken him to another dimension altogether.

"Part of inventing," he said, "is trying to improve things, but it's partly just being bloody-minded and wanting to do things differently. A lot of the things that I've worked on in the past didn't actually work out very well. But the fan wing actually worked out.

"The genesis of the idea," he went on, "was to distribute the flow of air as far as possible over the aircraft. We take that to the extreme, sucking the air in through the front over a rather large area, the whole width of the fan. It compresses the air as it comes through the fan and it gets blown out at very high speed across the wing's trailing edge." When he dreamed up the idea, he had no notion whether it would work or not - or, indeed, whether somebody else had got there first. "Many years ago," he said, "I worked on a new engine which employed hot air, where air was moved from one section to another and heated and cooled at very high speed. I was very excited about it - but then I looked it up in the literature and found it had been developed in 1816 by somebody else. A fellow called Stirling, it was the famous Stirling cycle engine.

"I'd fully expected also with this technology to find out that Blogs had developed it in '54 and it hadn't gone anywhere. So I was continually surprised that nobody knew about it, and that it actually turned out to be different." The first imperative with any invention is to keep it secret. "You have to keep the thing totally private before you do the patent," he said.

"Before I deposited the first patent we were doing tests at night time in the car park of the local supermarket. That's what we had to do, much to the terrible embarrassment of my son, to see this absolute nutcase of a father going into the car park with this ridiculous machine trying to get it to fly. And of course the first times it wouldn't fly."

Then there was the Wright Brothers moment, when he got it into the air and it stayed there. "It didn't go very far the first time: it went up, flipped over and crashed. But at least it got off the ground, we'd proved it was possible."

The next challenge - after further tweaking had yielded more impressive flights - was to patent the plane: enormously expensive, as they discovered. "We suddenly found ourselves facing an enormous bill," said his wife, Dikla. "Suddenly we had to come up with £20,000 for the first patents, and we had no money at all."

"I was ready to quit," said Pat, "because I realised there was no way privately that I could raise that much money, and I wasn't going to put the family into that kind of debt." But then Dikla, a teacher and poet with several books to her name, threw herself into the task. "That was when we took the decision to collaborate," she said, "and to call round family and friends and say we're starting a company, do you want to put in x? The money came in and we got £21,000 the day before the deadline. That was in 1999. Ultimately, we got the money for the patents we wanted."

The result was Fan Wing, a British plc, with its own website, www.fanwing.com <http://www.fanwing.com> , designed by their son Daniel; from its obscure origins in a supermarket car park, the sky barge was on its way.

Family and friends had rallied round, but for the outside world the credibility gap continued to gape. Enter David Nicholas, an engineer and naval architect and until recently innovations and technology counsellor for Business Link Wessex, a man whom Dikla describes as "the inventors' guru" and who has been the midwife for the projects of many struggling British geniuses in recent years.

"I met Pat two and a half years ago," Mr Nicholas said, "through the introduction of a friend who had seen this remarkable idea of his when they had no money." Mr Nicholas guided them through the next phase, setting up a "virtual company" with respected figures in engineering and aeronautics as unpaid directors to give Pat the credibility that his one-man set-up lacked. The first fruit was a £45,000 grant from the Department of Trade and Industry. Peebles used the money to build a much larger and more impressive working model - total wingspan about 15 feet - developed in the wind tunnel of London's Imperial College, and multiplying its efficiency in the process.

"It was absolutely fabulous," Pat recalled. "We doubled the efficiency in two weeks of wind tunnel testing. It was very exciting because, being a new device, very small changes can make big changes in the efficiency. People are still trying to tweak conventional aircraft but they're lucky if they get half a per cent, maybe one per cent, change in efficiency. But at this early stage, there was one point where we moved a little section of the wing by 10mm and got a 30 per cent increase in efficiency."

Mr Nicholas said: "An employee of British Aerospace told me that Pat got more out of that £45,000 than British Aerospace would have got out of £4m." Mr Nicholas said that when he first saw a laptop video of the flight of an early model of the Fan Wing, "I was blown away by its astonishing performance. It can go very slowly like a helicopter, but it can carry much heavier loads. Pat doesn't like me saying this, but I regard his plane as the fourth great breakthrough in aeronautical science: there was Orville and Wilbur Wright, Sikorski's helicopter, Sidney Camm's jump jet, and Pat Peebles and the fan wing." The plane's unique attributes mean that, if and when a government finally decides to put serious money behind it, the range of possible applications is bewilderingly large.

"It's quieter than a helicopter of the equivalent weight," Mr Peebles said. "They've been trying for years to get permission to fly helicopters into Heathrow for commuters out of the bankers' belt, and they never can because they make too much noise. So this could be very useful for connecting for example the five airports around London, a flying bus going maybe 60, 80mph, maybe 100 mph."

Likewise, the plane could also be used to deliver aid in Third World countries with bad roads, or to fly back and forth over mine fields carrying heavy, ground-penetrating radar to detect land mines. Or alternatively, it could be employed as an unmanned plane carrying heavy weapons and firing them into people's living rooms.

"We're not sure what our politics are here," added Pat. "It would feel better obviously to go for something that would be helpful and non-aggressive - minefields, developing countries, freight. But practically everything that's been developed started off being developed by the military." Whoever ends up buying fan wing, Pat is looking forward to the breakthrough - so he can go back to his daydreams. "Running a company is very time-consuming work," he said. "There's not much time to get one's hands dirty. It would be nice to design some other things." A better spaghetti twirler, say.