*****************************************
Greetings COMMANDERS, EAGLES and ANGELS!
THIS IS GOD/GODDESS [Beloved Lord Alcyone and Mother Sekhmet] ALL THAT IS----SPEAKING TO YOU TODAY!
The most important thing WE can say that HAS TO BE DONE right now on this planet is for THE LIGHTWORKERS to REMAIN NEUTRAL!
Understand there are many situations involving much violence that is KARMIC IN NATURE and must be worked out. The best thing WE can do is to not 'join in the energies' by participating for or choosing 'EITHER SIDE'!  REMAIN IN A NEUTRAL PLACE [in your heart center]---and send UNCONDITIONAL LOVE NO MATTER WHAT IS GOING ON!
This message ALSO comes to you today from THE COUNCIL OF THE SOLAR TRIBUNAL and from Lady Master Nada---the best lawyer in the Universe!
These intense frequencies that are hitting all of you and 'getting you riled-up' are needing YOUR LOVE SENT TO THEM instead!  The antidote to HATE IS ALWAYS LOVE! The situation in the middle east with Iraq and Palestine 'are what they are' and they NEED YOUR LOVE and NEUTRALITY.
ANGER HEALS NOTHING---it only creates more anger.  It is ONLY LOVE THAT HEALS!  So do not 'get caught up' in the fray by 'identifying with either side'. Observe---feel what you must! Pray---and, as you hear and see the pictures or scenes send THE ROSE RAY from YOUR HEART and command THE VIOLET TRANSMUTING FLAME by THE POWER OF THE MIGHTY 'I AM' PRESENCE to surround every situation and allow the frequencies to do the work!
What is needed is more and more CIRCLES OF LIGHT and LOVE!  This will bring PEACE ON EARTH and NESARA'S NOW WON ANNOUNCEMENT into manifestation!  This is what THE ADMIRAL has told us!
Yet and still---when 'the moment is right' we WILL DO WHAT MUST BE DONE!  Already this is happening and being done as 'private armies are disappearing' we speak.
WE will not give you any dates, times or places because even now, at any moment--ANYTHING COULD HAPPEN!  NESARA will happen when you least expect it!  As The Admiral has said, "I will come like a thief in the night!"  And so will NESARA'S ANNOUNCEMENT come suddenly--while you have been about 'thy father's business'---it will just happen!
Also please understand, the frequencies that are pouring into your planet come from the 12th dimension and higher and this is causing THE STEW TO BOIL! Everything that needs to be transmuted for there to BE LASTING PEACE ON EARTH IS COMING UP TO THE SURFACE SO IT CAN BE SEEN, DEALT WITH AND CLEANSED!
This is why 'everything---ALL THE LIES ARE BEING EXPOSED'!
WE would say THE POT IS SIMMERING VERY NICELY! And it is just about time for that 'Ork Stew' to be served!
SO HOLD THAT THOUGHT----
NESARA NOW WON' IS COMING TO PASS!
WORLD PEACE NOW WON IS COMING TO PASS!
Also--about 'all the stories' going on about 'who is who' in the Spiritual Hierarchy----this is a game to pull you away from the LIGHT, and to 'plant seeds of doubt'!
WE say to you--Beloved Lord Ashtar is a GREAT AND NOBLE MASTER AND BEING OF LIGHT who has been working to save your planet and this Universe for many aeons of time! 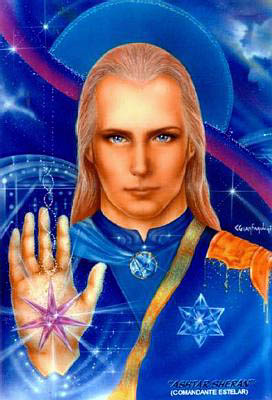 HE has never participated with or been involved in the Illuminati in any way!  That is a lie!  And what he has said about THE ASCENDED MASTERS and THE GALACTIC MASTERS, as well as Annubis/the King of Egypt are all lies!  David Icke is 'controlled by the darkness', and is a 'paid agenda maker' by the Queen herself!  Understand he has a 'role to play' and has been put there on purpose to spin 'tales of distortion and to twist the truth' for his own agenda, and to create confusion where he puts in 'a tiny truth' and then plays with the minds of the people!  He will pay for his 'crimes against humanity'---THE LAW of KARMA is exact! He is a 'war criminal' and one of the Renegade Reptilians who he will be dealt with according to the GALACTIC LAWS OF THE SOLAR TRIBUNAL!
YOU are being asked to STEP UP TO THE PLATE, AND YOU WILL HIT THAT HOME RUN ALL THE WAY! It is time for 'you' to build it---and we have always said, 'WE WILL COME'!  And--WE HAVE COME!  WE ARE HERE!
TRUST IN THE MAGIC OF 'WHO YOU ARE'!  Remain neutral and do not 'get caught in the games' or buy into 'the fear-based realities' they want you to believe are real!  Call upon THE MIGHTY I AM PRESENCE!
'Dissent is THE ONLY VOICE' so SPEAK UP LOUD AND CLEAR!
We love you!
!Q'aplaa!!!
See you on the Bridge.
NAMASTE
^j^  ^j^  ^j^
That's today's report.  Love to all. Jen
Here is TODAY'S NEWS DIGEST from INFORMATION CLEARING HOUSE "News You Won't Find On CNN and FOX Moooo's" at www.informationclearinghouse.info
**************************************************************************************
TODAY'S DEMOCRACY NOW SHOW: Tuesday, April 13
* Fallujah Refugees Describe Horrors of U.S. Siege *
We get a report from Baghdad with Free Speech Radio News' Aaron Glantz who speaks with Fallujah residents fleeing the besieged town. They describe digging mass graves, snipers and bombers killing people inside their homes, attacks on ambulances and the increasing anger and resentment towards U.S. occupying forces.
Listen/Watch/Read
http://www.democracynow.org/article.pl?sid=04/04/13/1443247
* "Fear is Transmuting Into Anger" - Rahul Mahajan Reports on Resistance in Iraq *
We speak with author and antiwar activist Rahul Mahajan in Baghdad who was one of the only western reporters in Fallujah during the U.S. siege. He says: "The United States has completely lost control, and even the mildest of people are now absolutely enraged at what is being done in Fallujah, and want the United States out...anyone that didn't have a gun today could pick up a gun tomorrow."
Listen/Watch/Read
http://www.democracynow.org/article.pl?sid=04/04/13/1443251
*EXCLUSIVE: Farouk Abdel-Muhti Set Free After Two Years in Prison *
Palestinian activist Farouk Abdel-Muhti was released from jail Monday night nearly two years after he was detained by U.S. immigration officials. He was never charged with a crime. In a national exclusive, Democracy Now! speaks with Abdel-Muhti in his first interview as a free man. He discusses his release, his struggle for freedom and the conditions of his detention which included 8-months of 23-hour lockdown in solitary confinement.
Listen/Watch/Read
http://www.democracynow.org/article.pl?sid=04/04/13/1443256
Defiant US says Falluja dead were rebels :
The death toll in Falluja has sparked widespread international concern and has led to condemnation by the US-appointed Iraqi governing council.
http://www.guardian.co.uk/Iraq/Story/0,2763,1190288,00.html
Keystone Kounter-Terror:
Only George W. Bush could study a memo titled "Bin Laden Determined To Strike in US", and then blithely assert that it "said nothing about an attack on America."
http://www.thenation.com/outrage/index.mhtml?bid=6&pid=1372
===
Senior officials received different memo than Bush :
Just one day after President Bush received a pre-Sept. 11 briefing on al-Qaida’s effort to strike on U.S. soil, senior government executives received a similarly titled memo that excluded information about current threats and investigations
http://www.heraldnews.com/site/news.cfm?newsid=11301291&BRD=1710&PAG=461&dept_id=99784&rfi=6
Robert Fisk: Deaths of scores of mercenaries not reported:
At least 80 foreign mercenaries - security guards recruited from the United States, Europe and South Africa and working for American companies - have been killed in the past eight days in Iraq.
http://www.informationclearinghouse.info/article6031.htm