Who can we trust these days?

Your Self, your 0.point. From there you get the proverbial shivers when you touch truth. Intuition is already manifested Female of the trinity. Discernment is using logic, intuition and the sense for truth.

Apparently ­ and that?s been lived in daily practice ­ Love rulezz. Notwithstanding the Enchanted Dark Cabal are having fun using the same ole tricks as usual. That?s what you get when you cut yourself loose from Source: no creativity. Who needs it? Seems to be correct so far! Both sides need to create a win-win here.

I get a little bit frustrated and desperate when I experience on a almost daily basis that here in Holland people, given the odd exception, still are numb to, and I can make a rather long list here, spending power having been cut in half by introduction of the Euro, Theo van Gogh having been killed by Dark (Joan of D?arc, mmm?) mind control blaming the Muslim (Pathetic. People awaken!), our beloved war-hero prins Bernard having offered to be steward of Holland (and small surroundings no doubt) towards friend Adolf, Beatrix and a number of politicians are Bilderberg and have solely corporate interests, the tax service is not what the phrase implies it to be, society and state are not synonyms and most recent: the fact that the army is making a few thousand employees redundant in favour of, yes, young people who can be put into service in peace operations. Tell me again, who won WOII?

So, being almost desperate in this seemingly ever ongoing drama creating the Fourth Reich, what source of information can we trust?
The media are mainly being spoon fed by Government, although some slip of the pen occurs, as an act of rebellion more often it feels to me. Go guys, keep it comin'!
No paper, no TV, what now? Internet! (Still an outside source.)
All those lovely, emotional body growing personalities wired together, forming a net of waves forming consciousness, and the occasional lazy human bugging in from the keyboard.
(Intermezzo: my wife just got home and handed me the mail. I was amazed to see an envelope of "Dienst Stadsbeheer" (City Management Service), featuring in the right hand bottom corner a logo off : "Lloyd's register quality assurance". Screw my head off, I'm nuts.
Back to the Net.
When you're searching on a topic you'll basically find two side of the same coin: the official sites and the, what I call, "protest sites", both under close observation. The dark knows about energy systems, critical mass, etc., etc., every One counts. The AIVD "helped" me with my internet site at the change of the millennium, I hope they just watch and take their advantage from it this time. Both sides are doomed casu quo destined to meet at the zero point, flip over 900 and see where we find ourselves. We're almost there, so it's time to shake hands, combine forces and take it from there.

What do I have left for the bewildered citizens of our stealing, shortage creating and not looking after our interests institutions who presumptuously call themselves our leaders when they have come this far?
Channelings! (Big sigh of relief.) The Light, only the Light!
Here are a few side-marks which suggests you solely rely on your own discernment, intuition and connection to All that Is.

An e-mail titled "Stuff to ponder" I wrote to a German friend last week:
(Excusé le Germa(i)n, it's authentic, and you better start getting acquainted with it.)

The words we receive as channelings are mostly sucked by a straw out of the endless realm of ascended Being in a hunger for guidance and answers to questions Earth' children pose as they fail to understand what's going on and need comforting. Quote: "They proceed like children of very rich parents having no idea of the minute feelings of the poor they so much would like to make happy." I feel there's something in this one. Floating in Oneness and eternal bliss can cause a slight alienation. I believe st. Germain stated that to be a fact in a channeling and I think he tackled that by gathering first-hand expertise from us and his many physical eyes and ears he has running around on the planet. They are not idiots, but have a tendency to get out of touch with our reality. That's were full body ascension comes in. Why do you think we're going through all this trouble? We are in a deep dark cave and the AM have "gone before" and tied the rope. It is the only way out of this nerve-wrecking game. Here we go with the Sirians: "Instead of arresting the press Czars and coming down with the power and technological know how, after all, we are going to become just now Galactic Citizens so why not helping practically?" Solidity predicament: the kid can't walk? Shove him in a wheelchair and push. That's not a fine way to make sure a few billion souls are getting out of the dungeon and know how to stay out. They will fall in the same pit, with the same innocent face, again, and again. Earth one, Earth two, and One knows how many worlds before, during and after that. The Sirians are in the same Galactic shit we're in and are, hopefully, now finally down to Earth enough to realise we are their way out, also. That's why everybody is here. "Hey dude, someone's seen the light, we believe it's the exit! Haleluja!" Quote: "What we are supposed to do and don't do. Where for heavens sake is the other side of the coin in that picture?" Kept in the dark (Light) for security reasons I'm sure. Apparently there's a war going on and we're on a need-to-know basis. Not very comforting or satisfactory. Possibility of creating misunderstandings and doubt. Quote: "Es beginnt jetzt eine Periode, in der ihr mehr denn je absolute Liebe und Disziplin benötigen werdet." Will someone be so kind to hand me a fresh pack of Duracel's? And Sananda tells us of a shower of money problems. Either HAARP is being voiced or we need some serious talk with the boys and girls upstairs. Quote: "Auf unserer Seite läuft es wie am Schnürchen! Ja, auch wir machen gelegentlich Fehler, weil alles ein Prozess ist, weil wir alle zusammen wachsen werden ­ ihr mit uns und wir mit euch!" Wo ist hier die nötausgang? See what I mean? Battle fatigue and recovering and trusting something that has become hardly distinguishable and is the inside-out reality of every day's screaming education, media, peer pressure, preachers, guru's, all except for the odd complete raving lunatic one or those inside asylums is, I believe, highly or at least somewhat underestimated by those who have that inside-out reality as their daily mirror. Final quote for the day: "Sie sind großartige Lichtgestalten ebenso wie ihr, sie sind auserwählt jedoch nicht in Form einer Selektion, sie haben sich selbst auserwählt ?Versuchskaninchen" zu sein. Es sind Menschen, die unter euch leben, es sind keine Indigokinder oder Kristallkinder, es sind Menschen, die keine Titel wollen, die nicht in eine atlantisch induzierte Schublade gesteckt werden können." Seems we made Ashtar happy out of free will. If it is any consolation: I just remembered putting the Nesara wagon closer to a cross-road with a black car about to ram it sideways, on Creators table, He playingly put it further to the left. His question was: "what do you think will happen?" Big mess was not the right answer, as was a destabilising of the "white" cars path. The car was a golden Lamborghini with one side factory made and the right side human. Big V12 twin-turbo (I checked) so no problems there. The human side was the key factor in keeping this baby on the road and on course. So I'm almost full-circle with this. There were no corners in that road, the distance was short, the two cars were moving fast. Hold fast the light of victory. Salamat yarin!


Bottom line:
Trust your Self and dare to be a raving lunatic.

Heartily greetings to all dear readers! CU next time!

The coming together of the two sides:
November 18, 2004, from the bridge of the New Jerusalem & the hon. Fenton Gorge 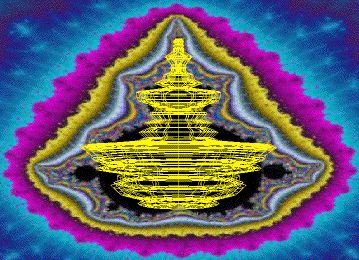 Permutations of the I-Ching and 64 DNA codons, into a 384 base, renders a graph of fractal time,, 64 levels of time, accurate on the atomic level, as analysed by Dr. Sheliak of Los Alamos National Laboritories. Ananda doubled the graph for anti-mater fractal time, in 1995, and then traced it into a 3D extrusion. The result is the shape of the mandelbrot fractal, and the Stupa the Buddha Body of Dharma. It is also the King Peice of the game of Chess which comes from China, just as the King Wen, I Ching sequence comes from ancient China. Time Wave Zero Into another dimension.